story garners a lot of attention. This year the magazine crowned Rihanna with the title, offering up the pop singer naked on the cover, with only a couple leaves to hide her nether regions. When I saw the issue arrive in my mailbox, the cover — although it certainly caught my eye — may not have pulled me in with the most fitting photograph. Doesn’t the sexiest woman alive also have, in addition to her beautiful body, a beautiful face? The Esquire cover features Rihanna’s glistening body but most of her face gets lost behind her hair. Perhaps they covered a lot of her face up so you’d spend more time looking at her curves, but if I’m supposed to be reading about why Rihanna’s the “Sexiest Woman Alive,” I want to see the whole package. Also, once inside, the feature photo that accompanies the story looks too similar to the cover image. A little variety and a little more facial visibility wouldn’t hurt. Nonetheless, this month’s Esquire deserves a round of applause for putting Rihanna on the cover. She’s a symbol for not only sex and beauty but also for female empowerment, given how well she’s come back from her physical abuse scandal with ex-boyfriend Chris Brown.

Any time a magazine produces multiple

covers for a single issue, it’s likely to catch my eye. The four new ESPN The Magazine covers are certainly attention grabbers. The magazine’s annual Body Issue hits newsstands today with four nude athletes on the cover: Clippers forward Blake Griffin, soccer player Hope Solo, New York Mets shortstop Jose Reyes, and Olympic snowboarder Gretchen Bleiler. “After a while I didn’t really care,” Griffin told USA Today. “They were bringing the robe over after every take and after a while, I was like, ‘Whatever, it’s OK.’ I guess I’m more comfortable now with less clothes.” Chicago Sky Center Sylvia Fowles, Olympic gymnast Alicia Sacramone, and track and field star Natasha Hastingsare are among the other 22 athletes featured in the issue. 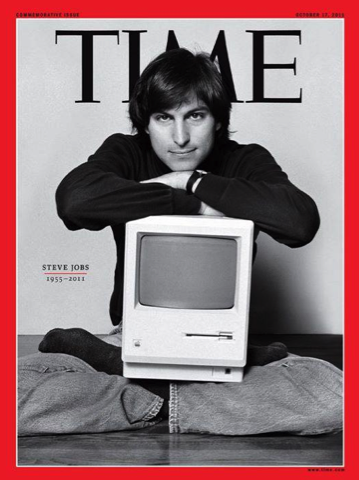 Most magazines aren’t known for their

fast turnaround. TIME is one of the exceptions. As the first and now one of the last true-to-form newsweeklies, TIME had its next issue already filed when news broke yesterday of Steve Jobs’s death. But that didn’t stop managing editor Rick Stengel from halting the presses and hauling in the staff to produce a new issue — in under three hours, no less. Big kudos to TIME’s hard-working staff for cranking out the commemorative issue in such a short period. The new cover, pictured here, marks the ninth that the Apple visionary has graced since 1982. For a look at the other eight, click here. And go to WIRED if you want to read the best tribute to Jobs I’ve seen throughout the last 24 hours worth of coverage. 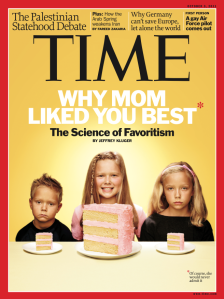 TIME always impresses me with its ability to mix playful and serious covers. This week’s cover story, “Playing Favorites” by Jeffrey Kluger, taps into one of the most common arguments among families with more than one child: Who’s the favorite? The cover image plays up the notion that all parents have a favorite kid with a depiction of three siblings eating cake — only one got a significantly bigger piece than the others. An exploration of the science of favoritism is a great idea for a story, and I’m sure this week’s issue will sell well on the newsstands. After all, everyone would like to think they’re the favorite child, right? Well, so long as they don’t have a case of the middle-child syndrome (like me).

Neil Patrick Harris graces the cover of the new Entertainment Weekly for a story written by, well, none other than Neil Patrick Harris. In the seven-page spread, NPH traces his own Hollywood story, from his days as a child actor playing Doogie Howser to the hilarious Barney Stinson on How I Met Your Mother. This isn’t a first for EW in terms of having a celebrity write their own profile. Ryan Reynolds penned the June 24 cover story, “Why I’m Obsessed with Ryan Reynolds, by Ryan Reynolds” and the magazine received gushing letters from readers. But the real question is: Is this a smart move for the magazine? Are these articles better stories than the ones EW writers would have crafted?

Well, it’s hard to compare the two, since magazine writers only have a limited amount of time with the subject. And with limited access, they’re working with less material than the celebrity who writes their own story. Having profiles like these also adds variety to the voices in the magazine, which is always a good thing. So long as the magazine continues to select celebrities who are good writers, it fulfills the brand’s mission of providing readers with unique access to Hollywood and its many faces. Both NPH and Reynolds delivered smart, witty pieces that readers could connect with. Let’s just hope stories like these don’t turn into self-promotional drivel.