He’s the reason why I haven’t been

posting. Ernie is 11 weeks old, is a chronic peer, and loves tennis shoes. He will keep me quite busy over these next few weeks.

Time Out New York‘s most recent issue, The Sex Issue, 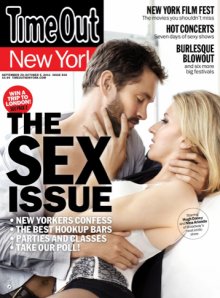 makes me question whether people still turn to magazines to identify a city’s top singles. Sure, getting on the list gives you bragging rights, but does anyone actually care anymore? In this era of unconventional matchmaking, with numerous sites like eHarmony and televisions shows like The Millionaire Matchmaker glorifying the business, where do magazines come into play? TONY does a good job of highlighting singles from various backgrounds and for every sexual orientation, yet we don’t know what criteria the magazine uses to select this supposed lot of hot bachelors and bachelorettes. Perhaps more transparency would give the magazine’s annual roundup of singles greater importance. Still, I’d argue city magazines augment their Top Singles issues for something that’s actually useful, something hands-on. Well, I’m really pulling from what The Washington Post Magazine does each week, since its clever — and popular — Date Lab page follows two singles on a date that the magazine editors set up. That way, rather than point wishful singles in the right direction, the magazine actually plays matchmaker and documents what happens.

Even though I’ve only lived in New York since June, I learned quickly where the tourist traps are and how important it is to steer clear of them. Aside from the sheer amusement that comes from seeing the kinds of people that Times Square draws, I avoid it like the plague. Everyone’s too busy gawking at the double arched “M,” as if they’ve never seen a McDonald’s before, or sizing up the Naked Cowboy to actually look where they’re walking. The New Yorkers are easy to spot, since they’re the only ones not walking in zig-zags. That’s why the latest New Yorker cover thoughtfully captures the problem by showing how Times Square should be — with a designated lane for tourists. The only thing that’s missing is a moving walkway for the non-tourists, given the rush New Yorkers are in (especially to get out of Times Square). 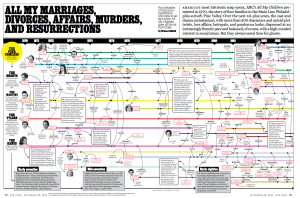 Greetings, all! I’ll be using this space to share my thoughts on magazine articles that pique my interest, industry-related news, and observations on life in Washington, D.C. In the meantime though, there’s a great graphic in this week’s New York magazine about the 40-year history of All My Children.